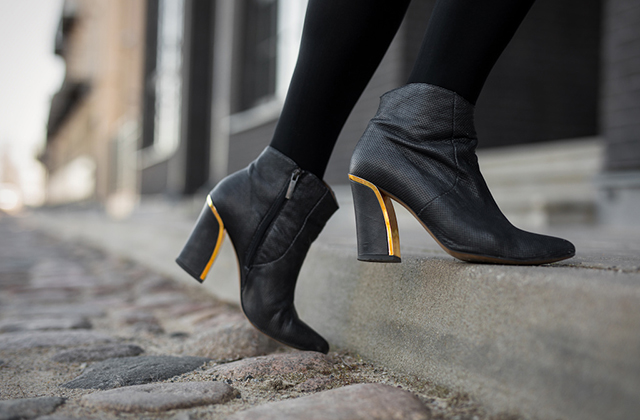 Time to switch now to UGG boots for men, aside from being authentic it is definitely durable. If you don’t have slender legs, then you can’t imagine that they could ever present a problem. If you have very skinny legs and you eluded the “chicken leg” name calling as a child, then lucky you. I was not that fortunate, however, as an adult I am very happy to be labeled as thin even after having a family of my own. What I found to be most challenging is finding clothing and shoes that fit. Usually, pants and sleeves are too short and boots are too baggy. When I find a store that sells pants that are long enough and fit properly, I try to buy multiple pairs and I always go back to that same store looking for the same label. I have had much more success with clothes than I have had with boots. I have always loved the look of knee high boots with skirts and dresses, but finding a snug fitting boot for my leg had been an exercise in futility. I got so fed up with failing to find the perfect fitting boot, that I was convinced that no one could possibly have gone to the same extreme measures that I did to find them.

Twelve years ago, I purchased a gorgeous pair of designer black suede knee high boots. By most standards, they were considered a very narrow calf boot. They were not slender enough for my leg, so I had a shoe tailor take them in. It was very costly, it took two months and they came back looking a little “off”. I loved these boots, because of the designer and the fabric, so I kept them and wore them faithfully for ten years. I had the heel and sole replaced a few times and because they were a classic style, they were never outdated. Two years ago, my husband gave me a pitying look when I was about to slide on my boots for a night out on the town and I knew it was time to say goodbye to them. Keep in mind that my husband doesn’t throw anything away, even his suits from the eighties that have holes in the inside pockets. So I knew if he was judging my boots, they really had to go. So first, I went online. There was the promise and the hope in all of these new retailers and designers that I had not heard of twelve years ago. And so it began. The relentless ordering, trying on and returning, ordering, trying on and returning.

It seemed to go on forever…along on with the endless disappointment, which seemed to grow stronger and more intense with every pair of boots delivered to my doorstep. It wasn’t just the calf area that gapped and bagged around my leg, it was the ankle portion that was too big as well. It dawned on me that maybe I was going about this all wrong. Perhaps I should try buying a pair of boots that I like and then have them taken in by shoe tailor. I found all of the she tailors within a fifty mile radius and I started power-dialling. I asked them if they took boots in, how long it would take and how much it would cost. Ninety-nine percent of them said that they do not take boots in anymore because it is too much work and it is not worth the trouble, so the conversation would stop after the first question. After having this same exchange repeatedly, I was curious and decided to ask, “Is it the money?” and “Would you alter my boots if I paid you more money?”.

I then realized I reached the bottom of the barrel…I was trying to bribe a shoe tailor into taking in my boots. What made it even worse was that none of them were taking my bribes. Finally, I reached a kind and soft spoken shoe tailor who said he would be happy to take in my boots. He said the charge would be twenty dollars and they would be ready in a week. I could have sworn I heard the angels singing. I should have known that it was too good to be true. When I picked up my boots, they were ruined. The seams were completely crooked and it appeared that they had splotches of dried glue all over the shafts. I couldn’t really complain, because when I dropped them off, the shoe tailor gave me the disclaimer that he did not guarantee results.

I became obsessed with finding the ideal fitting pair of boots. I thought that maybe the solution would be to go to the city and invest a small fortune in a couture pair of boots. Surely, I surmised, one of them would have a boot slender enough to fit my leg. I rationalized that the investment would be worth it since I was able to wear my last pair of boots for ten years with just having to replace the heel and sole a few times. So I, along with my husband (he went along for moral support), visited fifteen stores looking for the perfect boot. By the time we reached store number nine, he was looking around rolling his eyes in total annoyance and boredom, but he saw my desperation so he plodded along.

The ride home from the city was quiet and solemn. We were coming home empty-handed from the hunt and it didn’t feel good. After about an hour of silence, I asked my husband, “If there was a beautiful suede boot that fit a calf of 11-12.5″ with a very narrow ankle circumference and a zipper that goes from the top to the bottom, that would solve our problem, right?”. He looked at me suspiciously, knowing that this was a leading question. He responded, “Yes…it would, why?”. I said, “Do you think that I am the only one in this world with this issue?”.

It is from these experiences that Skinny Leg Boots was created. All of the boots have the same narrow circumference no matter what shoe size you take and they feature a zipper from top to bottom, so they are easy to take on or off. Best of all…there are three classic styles in two different colors that never look outdated.

Learn more about why we choose UGG boots over other brands.